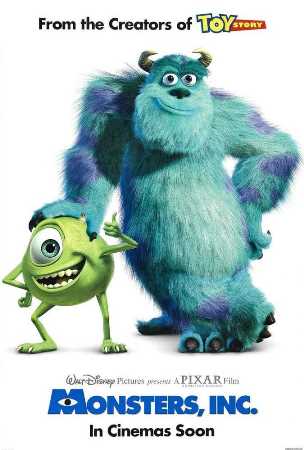 Summary: A city of monsters with no humans called Monstropolis centers around the city’s power company, Monsters, Inc. The lovable, confident, tough, furry blue behemoth-like giant monster named James P. Sullivan (better known as Sulley) and his wisecracking best friend, short, green cyclops monster Mike Wazowski, discover what happens when the real world interacts with theirs in the form of a 2-year-old baby girl dubbed “Boo,” who accidentally sneaks into the monster world with Sulley one night. And now it’s up to Sulley and Mike to send Boo back in her door before anybody finds out, especially two evil villains such as Sulley’s main rival as a scarer, chameleon-like Randall (a monster that Boo is very afraid of), who possesses the ability to change the color of his skin, and Mike and Sulley’s boss Mr. Waternoose, the chairman and chief executive officer of Monsters, Inc.
In a land of monsters, James P. Sullivan is king. He and his coworker/ friend Mike Wazowski are two of many monsters that work for Monsters Inc. a utility company that generates power for a very paranoid and nervous city of monsters. This power, oddly enough, is generated from the screams of children, which is produced by scaring them in their sleep. One night, however, Sully uncovers a devious plot to rid Monster city of it’s power problems, but in all the wrong ways. Together, ironically, Sully and Mike will fight to protect the innocence of the children they scare every night.